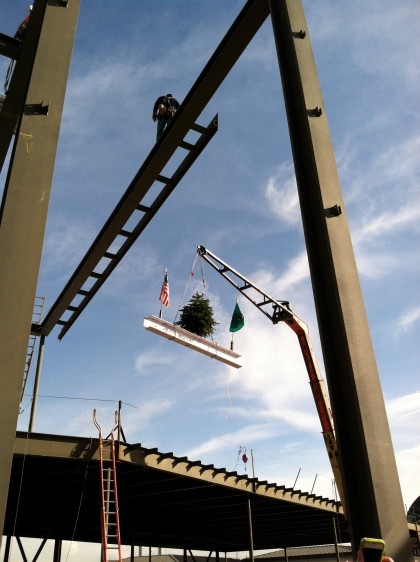 TAM patrons and trustees signed “the last beam” before it was fitted into place on top of new construction on the museum’s plaza.

I couldn’t resist cutting out of work yesterday to check out Tacoma Art Museum‘s “topping-off” ceremony – it was a milestone for TAM as the last beam was installed at the top of the huge building expansion now underway. TAM is preparing for a grand new arrival – a major gift of 280 works of American Western art from German billionaire Erivan Haub, his wife Helga and family. The gift includes a contribution for a new 10,000 square foot wing to house the collection as well as endowment funds for its upkeep. The wing project was designed by award-winning architect Tom Kundig of Seattle-based Olson Kundig Architects. TAM’s new plaza design (aimed to heighten the museum’s presence on Pacific Avenue) is by landscape architecture studio, Murase Associates.

“We are extremely grateful to the Haub family for this extraordinary gift, the largest in the museum’s 75-year history,” said Stephanie Stebich, Director of Tacoma Art Museum.

“This collection ranks among those of the highest breadth and caliber in American museums today,” said Peter Hassrick, a retired museum director, curator, and American and Western art scholar. 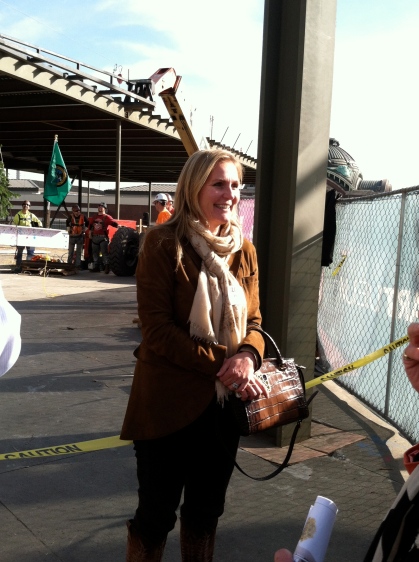 Liliane Haub described her family’s art collection which graced “light-filled rooms at the ranch” in Wyoming.

Spirits were high at yesterday’s event as TAM announced that it had exceeded its $15.5 million fundraising goal for the current phase of construction. The Haub family’s representative and TAM trustee, Liliane Haub, made an appearance fresh from a trip to the Sochi Olympics with a pitstop in Germany; the Consul General of Germany was also present. After opening remarks, TAM’s new Curator of Western American Art, Laura Fry; and Margaret Bullock, Curator of Collections and Special Exhibitions gave an intriguing talk about the relevance of the Western art collection to our region, and a glimpse into “Northwest in the West: Exploring Our Roots”, an exhibition opening May 10, 2014.

Fry described how early on pockets of artists coalesced around the country including a strong presence in the southwest (where much of the private collection is focused), creating a visual narrative of our developing culture. Bullock noted that the taming of the Pacific Northwest wilderness (with its colorful fur trappers, timber barons and gold diggers) was also about the shaping of our national identity, a narrative that has surged and shifted since the time of Lewis and Clark. The Haub collection follows this story through the work of iconic artists such as Albert Bierstadt, Thomas Moran, Frederic Remington and Charles Russell; and contemporary artists such as Native American painter, John Nieto.

To celebrate the “topping off” of the new construction, museum trustees and contributors signed the final beam of the exterior framework before a pine tree was secured on top of it, and workers in hardhats operating a crane raised and fitted it into place. The tradition of putting a tree on top of the last beam hails back to old Europe; back in the age when forests were chopped down to build structural behemoths it provided an offering to appease tree-dwelling spirits. Yesterday, instead of wood the evergreen perched on a steel beam. In the past, a flag was planted alongside the tree and stayed there until bier was provided for the construction crew. The flags of the United States and the State of Washington flanked the tree at Wednesday’s celebration, but there was no beer (plenty of time for that when the new wing opens this November). Still, patrons were “beaming”: it was an exciting event and a feather in the cap of Tacoma.  ~ Lisa Kinoshita