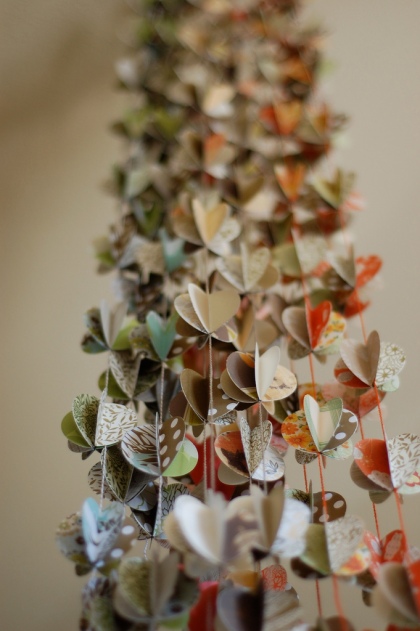 I first saw artist Laurie Cinotto‘s work several years ago; it was back when she was a florist, and the artwork in question was a centerpiece, a big, blood-red Celosia cristata flower that had the size and wrinkled topography of a human brain, that she had nestled in a short, columnar vessel wrapped in white birch bark. It was stark, unconventional, stunning and (description to the contrary) romantic, and it made me stop and reconsider what a floral arrangement could be. Ever since then, I’d hoped for the opportunity to show Laurie’s work.

At last, the time has come! Moss + Mineral is proud to host a holiday open house with Laurie Cinotto for the Third Thursday Art Mingle, Dec. 18, 5-8pm. Come see the gorgeous window display Laurie has created for us for the holidays, along with select pieces of her miniature paper artwork. 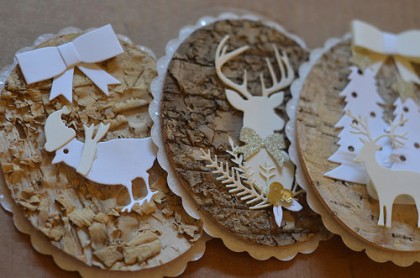 A miniature menagerie by Laurie Cinotto. Photo courtesy of the artist

Today, this multi-talented artist works not with cut posies, but handcrafted paper flowers. Martha Stewart is a fan of her exquisite papercraft, and she has written books on the subject. Six years ago, Laurie founded a cat-fostering organization in Tacoma, the Itty Bitty Kitty Committee, which has raised almost a half-million dollars for the local Humane Society branch. As others have pointed out, it is hard to corral this artist into any one category, simply because she is so good at everything she puts her hand to. She has been a “Curator’s Choice” in City Arts Magazine, and she has moved the aesthetics of wedding decoration forward with her unusual handmade boutonnieres and bouquets. 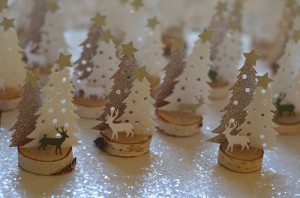 What is beyond dispute is the special loveliness Laurie brings to her world of miniatures: the tiny birds, plants and woodland creatures that populate her imagination. They are delicately wrought, and as small creatures tend to be, inherently mysterious. Looking at them, one is led into contemplations of nature, and time, and sustainability (she incorporates natural materials such as branches into her dainty dioramas). Recently, we asked Laurie to tell us about her craft, and the projects she is working on.

Hi Laurie. Where did your interest in crafting come from?
I think it might be genetic – there are lots of makers in my family. There are quilters, knitters and crocheters in the generations above me. Though I’m not much of a stitcher, nor good with the yarn arts, I do like repetitive crafts. 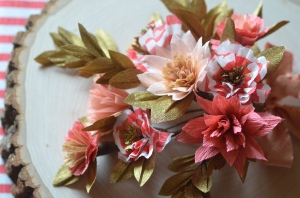 What types of art and craft are you currently pursuing?
It’s all mostly paper crafts. My biggest area of interest is paper flower making, and recently I’ve been trying to push that a little further, get a little more intricate and experimental with the flowers. Recently, I tapped into my stash of vintage crepe paper, which I’ve been holding onto for years. This 50+ year-old paper produces completely different results than the new stuff does, and the colors it’s faded to are remarkable.

You have published a number of books; please tell us a little about them.
First, there was Making Paper Flowers, a book/kit I did with Sterling Publishing. In the first printing, it was only available at Barnes and Noble. They did a second printing, repackaged it and it became Beautiful Paper Flowers….It is now available at any book store. Next came, The Itty Bitty Kitty Committee: The Ultimate Guide to All Things Kitten. 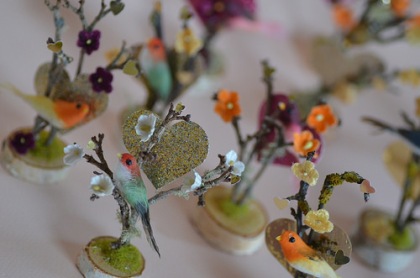 You used to work with live flowers. What attracts you to crafting paper flowers and garlands?
Yes, I was a florist for many years. Because flowers are perishable things, your time with them is limited. I did a lot of event work, and it was always sad to throw so much energy into something that is so temporary. Live flowers fade fast, but paper flowers can live on forever….My spin on it, I suppose, is no different than how I thought of fresh flowers. They’re a part of huge moments in life, like weddings and death. They are given with messages like “I love you” and “I’m sorry.”  They accompany the important things in life.

Please tell me about your seasonal inspirations and designs, including the tiny deer artscapes and cut-paper garlands at M+M. The garlands for the window involved cutting more than 1,500 paper rounds!
I do love all things holiday, so it truly is my favorite time for making. I like some sparkle, and during this season, you can get away with being extra-glittery. When I created the garlands for the window, I thought about the elements of Moss + Mineral:  the jewelry and mid-century bits, and how you combine natural elements and handmade things….As for the deer scenes, they’re tiny, seasonal bits: small, subtle paper-and-wood sculptures, with just a bit of glitter. Holiday seems to be all about ornamentation and over-the-top decor, but I know some folks appreciate quieter, wintery things this time of year, and these were made with those folks in mind.

It’s beautiful. Your fans in Tacoma will be pleased to hear that Martha Stewart has featured your work in her publications.
I’ve been in Martha Stewart Weddings on several occasions, and their wedding blog, too. It’s nice because a mention in Martha always means traffic to my craft blog and orders for custom work. [Laurie was also one of 5 winners in a nationwide contest whose craft was showcased in the 2010 “Martha Stewart Holiday Craft Fair” held in New York City.]

We are family. Photo: Laurie Cinotto

Another of your passions is felines. A brief history of the Itty Bitty Kitty Committee (IBKC), please?
We [Laurie and husband, Craig] began fostering kittens in 2007, and shortly thereafter, I began the IBKC blog. I started it to help “market” our kittens, and find them homes, but it’s evolved into something else over the years. Now, it’s a platform to share the fostering experience with others with the hope they’ll give it a try. It’s a place [online] where people drop by to have their day brightened by these adorable kittens of ours. Some of the folks following along are actually looking to adopt a kitten, but most aren’t. Most are just kitten fans. An amazing community has formed around the blog and when we hold our fundraiser each year, they all pitch in and support our local Humane Society. In our six years of fundraising, the IBKC community has given over $470,000 to our shelter. 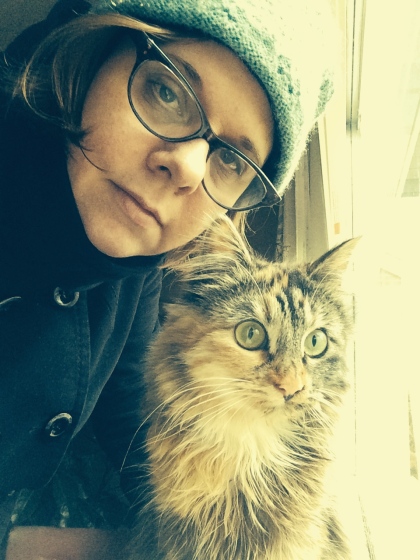 Laurie Cinotto and friend. Photo courtesy of the artist

It must be an incredible feeling raising almost a half-million dollars for the Humane Society. Please tell me about Charlene Butterbean, and your new book.
Charlene Butterbean is one of our permanent resident cats, and she plays a role in the raising of our tiny wards. She loves to groom them, teaches them boundaries, acts as a role model, and helps prepare them for their “forever homes”.  We also adopted Wylla, one of our former foster kittens. She has taken on the role of “nurturer” like Charlene has, but she enjoys having the kittens around and helps keep them entertained. This book is geared towards an elementary school audience, and tells many kitten fostering tales, and mixes in some practical kitten information, a few DIY projects, and other fun stuff.

What is your idea of the perfect holiday?
That would have to include a giant tree packed with ornaments and lights galore, and a happy, healthy group of friends, family, and cats surrounding it. A little snow would be fine – but not so much that it made travel difficult. A tray filled with Grandma Lamm’s Christmas cookies, a dish of Grandma Cinotto’s peanut brittle on the table, and Vince Guaraldi Trio’s “A Charlie Brown Christmas” on the stereo would make it  absolute perfection.

And maybe 15 kinds of cat food alongside the Thanksgiving feast…Thanks, and happy holidays to you, Laurie!  ~Lisa Kinoshita