What would a 21st-century cabinet of curiosities look like? Artists consider this question in WUNDERKAMMER: Artifacts, False Memories and Projections at Foss Waterway Seaport (705 Dock St. in Tacoma) from July 16 through August 30, 2015. Please join us for the opening Thursday, July 16, 5:30-7:30. Show runs through August 30, 2015. Read about the event here, and meet the artists below.

Renee Adams creates mixed-media sculptures and egg tempera paintings inspired by flora and fauna. She is a founding member of PUNCH Gallery, an artist-run space in downtown Seattle, and works as the Exhibition and Publicity Coordinator at Gallery One, a nonprofit art center located in Ellensburg, WA. Renee received a BFA in metalsmithing from Colorado State University and an MFA in sculpture from Central Washington University.

David Blakesley is a sculptor, studio jeweler, and the force of nature behind Shop Curator, a true-life cabinet of curiosities in the town of Edison, in the Skagit Valley. Blakesley’s unique brand of metalsmithing brings together ethnographic objects and natural specimens in body adornments that exude both raw power and elegance.

Justin Gibbens was trained in both scientific illustration and traditional Chinese painting – a skill set that he employs in his zoological drawings. His stylized and embellished beasts speak of evolution, mutation and biodiversity, and perhaps serve as cautionary tales and stand-ins for our anthropocentric selves. Gibbens was the recipient of a 2006 Pollock-Krasner Foundation Award and a 2008 Artist Trust Fellowship. He has shown nationally and internationally and lives in rural Thorp, WA.

Chuck Iffland “Rural Gothic” well describes the work of Chuck Iffland, a sculptor who has exhibited in the Northwest and nationally for the past 30 years. Iffland hews biomorphic figurative sculpture out of stone, wood, steel, and concrete. The contrast between pastoral countryside and decaying urban cores has been a lifelong influence. His work can be seen in the Northwest at the Wescott Bay Sculpture Park on San Juan Island, Monarch Sculpture Park in Olympia, and Webster Woods at the Port Angeles Fine Arts Center.

Shannon Eakins / Marc Dombrosky Anchors of the Tacoma art scene until heading for the bright lights of Las Vegas, Shannon Eakins and Marc Dombrosky continue to break ground with their finely honed conceptual explorations. They have exhibited widely, individually and collaboratively, in shows from the Pacific Northwest to the Great Lakes. They currently reside in Eau Claire, MI.

Steve Jensen comes from a line of Norwegian boatbuilders, grew up on a houseboat in Ballard, and has been carving wood for more than 20 years. He is the recipient of a Morris Graves Fellowship, an exhibition grant from the National Endowment for the Arts, numerous awards, and private and public art commissions. His work is in the collections of the Museum of Northwest Art, Morris Graves Museum of Art, Port Angeles Fine Arts Center, McNay Art Museum, and Larson Art Museum. He lives in Seattle.

Alexander Keyes received his BA in Sculpture from the University of Puget Sound in 2010, the same year he received the International Sculpture Center’s Outstanding Student Achievement Award in Contemporary Sculpture. He received his MFA from the University of Oregon in 2014. “My work is an ordering of my speculations and daydreams of fantastical voyages into the unknown,” he says.  Last year, Keyes was awarded residencies in Evoramonte, Portugal; and Sandnes, Norway.

Lisa Kinoshita is a mixed media artist and independent curator. Her artwork, influenced by history and the natural world, has been shown in this region at the Tacoma Art Museum, Museum of Northwest Art,  Vetri Gallery, Metro Parks Tacoma (through the Tacoma Art Commission’s Public Art: In Depth program), and the Woolworth Windows. With support from a grant she produced a collaborative project with inmates at Montana State Prison . Her studio jewelry has appeared in the New York Times, ELLE, Seattle Magazine and other publications.

Sabrina Knowles + Jenny Pohlman  Artistic collaborators for two decades, Seattle natives Sabrina Knowles and Jenny Pohlman create works in glass that are influenced by their extensive travels in developing countries in Africa and Asia. Their work has been featured in exhibitions nationwide, and is in the collections of the Tacoma Art Museum, Museum of American Glass, New Bedford Museum of Glass, Boca Raton Museum of Art, Mobile Museum of Art, and Racine Art Museum.

Nicholas Nyland was a finalist in the 2013 Contemporary Northwest Art Awards. “My art practice includes works on canvas, ceramics and mixed media that exist at the intersection of painting and sculpture. I use basic means to explore the nature of abstraction, [which is] generous and capacious, able to absorb and release a multitude of references. In the case of this work, the organic forms suggest otherworldly geologic formations or unknown organic creatures.” Nyland’s artwork has been shown throughout the region including at Tacoma Art Museum, Bellevue Art Museum, and the Henry Art Gallery, Seattle. He was recipient of the 2008 Artist Trust Fellowship. A 2012 solo show at Prole Drift, Seattle was reviewed in Art in America.

Holly A. Senn creates sculptures and installations from discarded library books, works with inherent meaning and associations. In these artworks she explores the life cycle of ideas—how they are generated, dispersed, referenced or forgotten. She received a Master of Library and Information Science degree from the University of California, Berkeley, and a Bachelor of Arts degree from Mills College. Her work has been exhibited at Kittredge Gallery, Tacoma; the Jupiter Hotel, Portland, OR; and Brooklyn Public Library, NY. Awards include an Artist Trust GAP Grant.

Jessica Spring started setting cold type on a Compugraphic Editwriter 7300 phototypesetting machine (a huge console with a big green screen) in 1982 as an undergraduate English major, beginning a lifelong interest in typography. She learned to set real metal type in 1989 and has been a letterpress printer ever since. Her work at Springtide Press—artist books, broadsides and ephemera—is included in prestigious collections around the country and around the world. She has an MFA from Columbia College Chicago Centre for Book & Paper. Spring co-founded the Tacoma Wayzgoose letterpress festival.

Brent Watanabe discovered an interest in art during the early 1990s, designing poster art for punk rock bands in and around Seattle. Today, his work explores how hand-drawn images can dynamically co-exist with video and audio. Watanabe is a two-time MacDowell Colony fellow, and has received an Artist Trust Fellowship (2011), and a “Visions of the U.S.” award from American Film Institute. His work has been screened in film festivals and exhibited nationally and internationally.

Kyle Dillehay + Alice Di Certo  Italian-born artist Alice Di Certo graduated from Ca’ Foscari University in Venice, and earned a Master’s Degree in Art History from Georgia State University. Through photography and sculpture she explores environmental and human interaction. Kyle Dillehay is a Tacoma-based sculptor, eco artist and photographer. He is the recipient of commissions from the City of Atlanta, the Metropolitan Atlanta Rapid Transit Authority, and Emory University, among others. 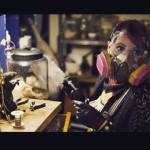 Mishele Dupree Winter was born “in the back of a black and cherry red 1969 Camaro somewhere between Austin, Texas, and Birmingham, Alabama.” She’s been burning tracks crosscountry and making musical and visual art ever since. A “resurrectionist” as opposed to a taxidermist, who works in a magical-realism style, she breathes life “into decomposing secret kingdoms.”

Rob Zinkevich is an environmental specialist from Plymouth, Massachusetts. While working as a forestry technician at Joint Base Lewis McChord, he began finding and collecting the deer bones that appear in his work. Zinkevich creates naturalistic lamps and furniture inspired by sigil (medieval magic symbolism), biomechanical art and “decopunk” (an offshoot of steampunk).

Guest Curator: Lisa Kinoshita
Special thanks to musical artists Alex Tapia and Nate Dybevik for putting the show to a beat.

Special thanks to Ray and Kerri Frederich

Hours and information at http://www.fosswaterwayseaport.org.